Elite Dangerous introduces formalised exploration. While in previous games in the series it was possible to explore uncharted systems, there was no in-game benefit for doing so. Elite Dangerous changes this by making exploration a central part of the game, including its own ranking system (alongside combat and trading).

Exploration in Elite Dangerous is a deliberate and concentrated effort - it is not just a race to jump into a system before anyone else and quickly run a scan to “claim” the system. To truly “explore” a system and appreciate the value of each planet or other body in a system, it must be scanned with dedicated equipment, one astronomical body at a time.

To go any distance, you're going to need to have fuel. There won't be anywhere to buy it out in the unexplored areas, so fuel scooping is going to be essential.

Make sure that you have a decent fuel scoop and are well-practised at scooping fuel without getting any heat damage. There is a guide and details about the different scoop modules you can buy on the fuel scooping page.

As with the guide to fuel scooping, remember that not all stars will be scoopable. This is critical when planning your journey. Always try to have one of the scoopable stars (A, B, F, G, K, M, O, or KGB FOAM for mnemonic) available before you run out of fuel. You can see which star types a system has from the Galaxy Map, so if you find yourself in danger of running out of fuel, navigate to one of these systems. Note with caution that if the scoopable star is not primary (the leftmost in the list), you may need to super cruise to it, which takes time and additional fuel.

When exploring you'll want to find a station close to the “edge” of known space to stock up on supplies before you start. You'll also want to assign your discovery scanner to a separate fire-group from your usual weapons so that you can “fire” it without firing your normal weapons; this can be done from your systems panel.

Of note, the discovery scanner does not need hardpoints to be deployed to function. In some configurations, however, firing the scanner will cause hardpoints to automatically be deployed. While exceedingly rare, exercise caution if you're exploring on a ship that has weapons in a populated system. 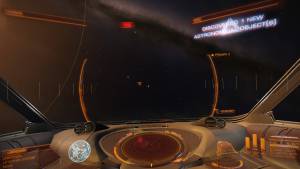 The equipment you get by default in your ship is the most basic available - there are enhanced pieces of equipment available at some stations that will increase your scanning capabilities and provide more valuable data. For example, the detailed surface scanner will substantially improve the detail and payout of data you turn in to a station.

If you have the detailed surface scanner installed, you don't need to activate it directly as it will automatically recover additional data during the usual scan.

Up to Retail 1.0, there was no vanity-naming or “discovered by” label associated with exploring a system.

In Retail 1.1, there is still no vanity-naming, but bodies are be tagged with who sold exploration data about the body first (i.e. you must discover and then return and sell the discovery data before you get the “discovered by” label). These tags are permanent, and will be shown to all other players on their System Maps when highlighting the bodies you first discovered in that system.

The player to first discover a body will receive a +50% CR bonus for its data when sold. While dedicated scanning of profitable bodies others have first discovered can have a higher CR/time yield, this can be especially lucrative for rarer planets and star classifications.

When looking for large numbers of bodies and systems that will grant first discovery credit, consider the objectives of other players:

People on the forum have been working out the approximate payments for different types of stellar objects - source of this data came from the Frontier Forums. The great visual guide was created by Commander Dubardo and originally shared on Reddit. 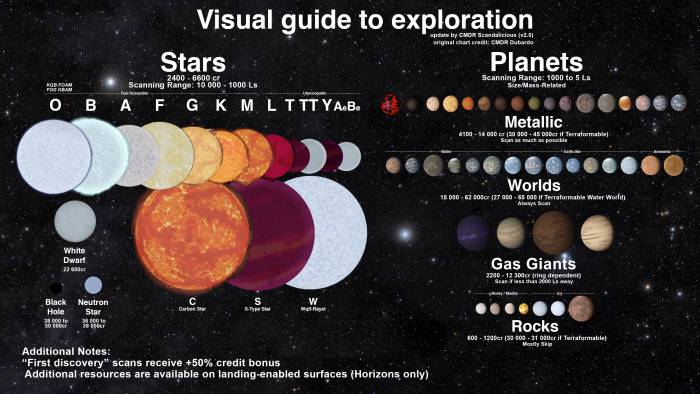 /!\ Old prices below, need to be updated!
Please use the picture for price ranges.

There are a few different discovery scanners. The basic one only has a discovery range of 500Ls, meaning that you might not scan all or even many of the possible bodies from a system's primary star. The Intermediate doubles this range, and the Advanced Discovery Scanner will detect all bodies in a system in one go, but costs about 1.5 million credits (compared to 1000 for the basic scanner)! Additionally, the distance at which the bodies are scanned increases - this range appears to vary with mass of the body being scanned.

Unless you've successfully bootstrapped your credits elsewhere, this means you will initially be relying heavily on the basic scanner.

While not a discovery scanner, the Detailed Surface Scanner is a 250,000 upgrade that substantially improves the payout of bodies you scan. Its purchase is relatively common at most stations, and it should be obtained at the first available opportunity (eg, before you even upgrade your discovery scanner).