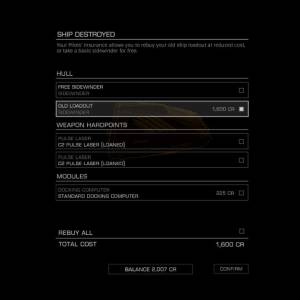 Elite Dangerous has introduced the concept of insurance, i.e. when your ship is so badly damaged that it cannot be saved, you automatically eject in an indestructible escape pod that will take back to the last station you docked at. You dont need to explicitly pay for an insurance policy as it is automatically included in the original purchase cost of the ship and equipment. Elite Dangerous does not have a concept of “saved games” that allow you to reload from a previously saved state, so insurance offers a way for players to get back to close to where they were before destruction of their ship.

When your ship is destroyed any cargo you had is lost and is not covered by insurance (it is either destroyed, or spilt out into space for others to scoop up). Once you are transported back to the station via your escape pod you'll have a couple of options as shown in Figure 1:

If you chose to pay the insurance excess on your ship, there will be a fee and you can pick and chose which modules you want to pay to keep - for example in Figure 1 the insurance excess is 225 to get the docking computer which is significantly less than the market price of approx 4500.

When re-buying your load-out make sure to keep an eye on your balance and make sure you have enough money left once you're done. For example in Figure 1 the cost is 1600, but as this player only has 2007 credits total, this will only leave 407 credits left which will make trading difficult - in this scenario it would be better to just take the free sidewinder and use the 2007 credits to start trading again.